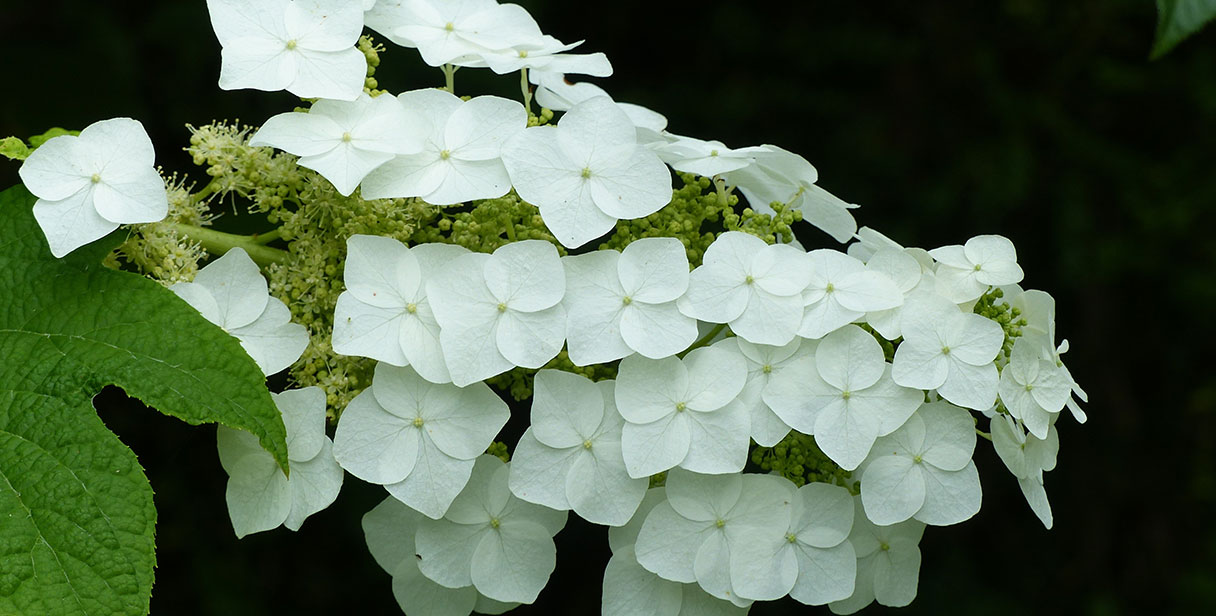 Oak-leaved hydrangea is called hydrangea quercifolia in Latin, which means exactly the same. Oak-leaved hydrangea derives its name from the giant, yellowish green leaves that closely resemble those of oak trees, even though the two species are not related. These striking leaves turn shades of red and purple in autumn, which will make a stunning display. Oak-leaved hydrangea has sterile creamy white flowers borne in conical panicles, which will age to pink. The showy, cone-shaped flowers slowly fade and turn a rusty brown at roughly the same time as the leaves acquire their lovely red autumn colour, thus concluding a long and rewarding flowering season which will have lasted from July to September.

The withered flowers remain on this deciduous shrub for a long time, until they are replaced, so it would be a good idea to remove the faded, papery flower heads, as they are not particularly appealing. There are numerous cultivars and species of hydrangea, some of which are excellent hedging plants. In addition to its fantastic and rather surprising oak-shaped leaves, hydrangea quercifolia distinguishes itself from the very popular and common hydrangea macrophylla by its cone-shaped flowers, higher tolerance of drought and ability to grow in sandy soils. Oak-leaved hydrangea is also more sun-loving and easier to grow than other species and varieties.

The pH of the soil does not affect flower colour, which is a well-known feature of the macrophylla 'Bodensee', whose flowers turn blue in acidic soil. Oak-leaved hydrangea is native to the southeastern areas of the US and is therefore happy growing in a sunny and moist position, but it is equally happy growing in colder areas, provided that the winter temperatures do not drop below -10C. Hydrangea quercifolia prefers to grow in full sun to partial shade, in a moist, humus-rich soil and sheltered from harsh winds. It will create hedges of up to 2m tall and can be kept tidy by pruning, however, it is not required. Unpruned hydrangea hedges have a more natural look and will look appealing irrespective of whether or not they are pruned. Hydrangea quercifolia has an annual growth rate of around 20-30cm depending on the conditions.